The Apollo Lunar Module (LM), originally designated the Lunar Excursion Module (LEM), was the lander portion of the Apollo spacecraft built for the US Apollo program. Designed by Grumman Aircraft it was to carry a crew of two from lunar orbit to the surface and back. Designed for lunar orbit rendezvous, it consisted of an ascent stage and descent stage, and was ferried to lunar orbit by its companion Command and Service Module (CSM), a separate spacecraft of approximately twice its mass, which also took the astronauts home to Earth. After completing its mission, the LM was discarded. It was capable of operation only in outer space, structurally and aerodynamically incapable of flight through the Earth's atmosphere.

Six such craft successfully landed on the Moon between 1969 and 1972, and a seventh provided propulsion and life support for a successful return of a crew to Earth exceeding its design requirements, in 1970 when the CSM was disabled by an oxygen tank explosion en route to the Moon. 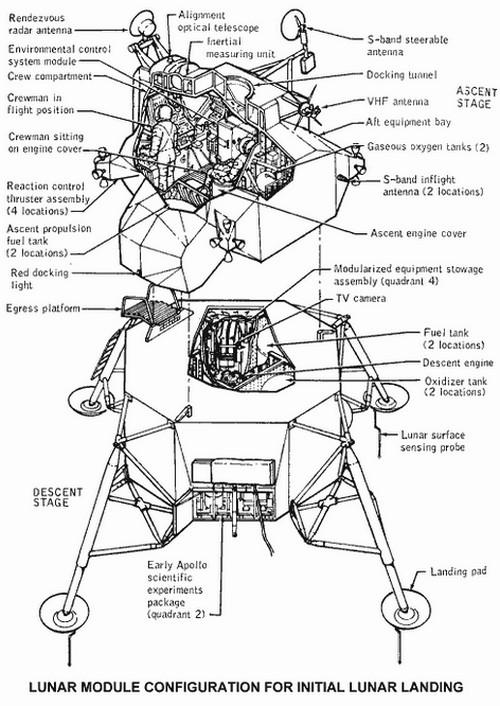 Lunar test modules on display at the Kennedy Space Center (KSC), Florida (USA). As used for the Apollo 11 program shown.

Several scale models exits of the Lunar Lander in various modelling scales. Some included a tiny lander in their Apollo Saturn V kit, like Airfix in 1/144 scale. Airfix also has a simple 1/72 scale model. DRAGON has a 1/48 model as well as Revell.