The Fokker F.27 Friendship was developed after the Second World War by the Dutch Fokker Aircraft company. Designed as a transport aircraft, it was quite modern being equipped with turboprops Rolls Royce Dart engines and using a glued  construction structure. Designed as a replacement to the successful Douglas DC-3 airliner, it became very successful indeed. The first prototype, registered PH-NIV, first flew on 24 November 1955. The later machines were longer and several versions were developed. It was used by airlines but also air forces. Fairchild USA made the type under license. At the end of the Fokker F.27's production in 1987 more than 750 aircarft were manufactured, more than any other western European civil turboprop airliner at the time. 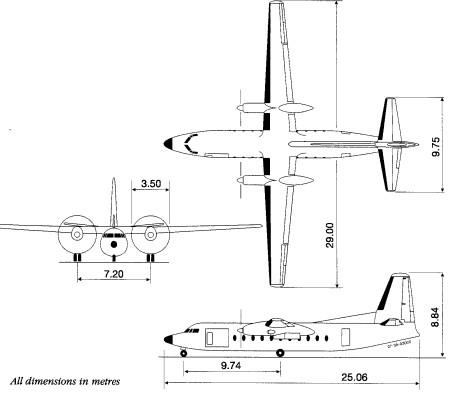 A number of photo's from the seventies and eighties of Royal Netherlands Air Force (KLu) F.27 aircraft. The KLu had 12 aircraft.

Details of another camouflaged F.27:

A F.27 KLu in the initial grey/dayglow scheme:

Please note that schemes could vary for a single KLu aircraft in time.

The same aircraft has been repainted in a camouflage scheme and is now displayed below the roof but outside the new National Military Museum (NMM) at the former Soesterberg airbase, The Netherlands:.

This F.27 has a special white livery for use during UN assignments. It has the code "C-11" and also carries Chaff dispensers at the lower aft fuselage.

This F.27 is a special version for maritime patrol duties. This Dutch F.27M has a white-dark grey scheme and was flown by the Royal Netherlands Air Force and sometimes also was based at the Dutch Antilles islands. This aircraft is coded "M-1" it has special equipment and pods. Seen at Fairford Air Tattoo in 1993.

Details of a civilian F.27 of the NLM CityHopper:

This walk around page was originally created January 2012 by M. de Vreeze