The Focke Wulf FW.190 was designed in Germany and the prototype first flew on June,1939. It was designed by Kurt Tank had a BMW 801 radial engine and during the second world war production deliveries began late 1940. It was very manoeuvrable with a high roll rate and was a clear match for the Spitfires and a formidable aircraft. Several versions were developed and later even a Jumo engine was used. The FW.190 was widely regarded as Germany's best fighter. 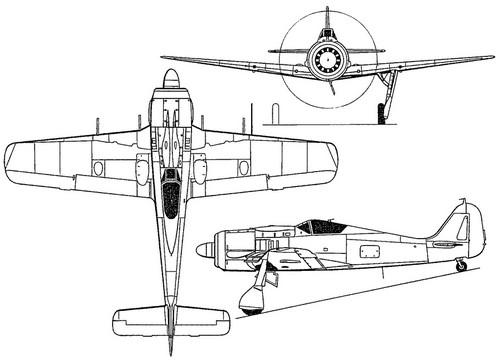 This aircraft was license manufactured during the War by the German company Arado as a A-4 but rebuilt by Fieseler as a F-8 with Werkenr. 931884. It was captured after the end of the Second World War. Now on display at the Smithsonian at the Dulles (Washington DC).

This aircraft with werkenr. 584219 was converted as a VIP aircraft during the War by Jagdfliegerschule 103. It was captured after the end of the Second World War in Norway and tested at RAe Farnborough. Restored, it is painted in German markings of Gruppe I, jagdgeschwader 54 as used at the Russian front. It is on display at the RAF museum in Hendon, London (UK).

A small German company, Flug + Werkbegan in 1997 to reproduce new Fw 190 aircraft. Being new reproduction builds from the ground up, they tried to make an accurate representation using many original dies, plans, and other information from the war.  The aircraft shown here was reproduced by as "A-9", construction #: 980574. The engine is a Chinese licensed Shvetsov ASh-82 as the orginal BMW engine were not available. Coded "White 14" , it flew also in the Reno Air Race in 2010 and has registration NX190RF.

Here the flying replica aircraft as seen at Planes of Fame museum, Chino in 2012 :

In 1/72 scale, many models are available. Recently a very good and cheap new model was released by Airfix. [ Review]. In 1/32 scale, various models exist, from Trumpeter, Revell and Hasegawa. In 1/48 Eduard has a very good kit.