The Grumman F4F Wildcat was developed in the ninetheen thirties as a carrier based fighter. After loosing out to its competitor Brewster Buffalo, Grumman completely rebuilt the prototype as the XF4F-3 with new wings and tail and a supercharged version of the Pratt & Whitney R-1830 "Twin Wasp" radial engine. It was used first during the Second World War by the British Royal Navy in 1940 (as the Martlet) . First used in combat by the British in Europe, the Wildcat had a top speed of about 512 km/h. The U.S. Navy officially adopted the aircraft type on 1 October 1941 as the "Wildcat." It was in the Pacific not a real match for the Japanese Zero fighter. Both the Royal Navy's and U.S. Navy's F4F-3s were usually armed with four .50 in (12.7 mm) Browning machine guns. It was used throughout the war, particularly in the Pacific. 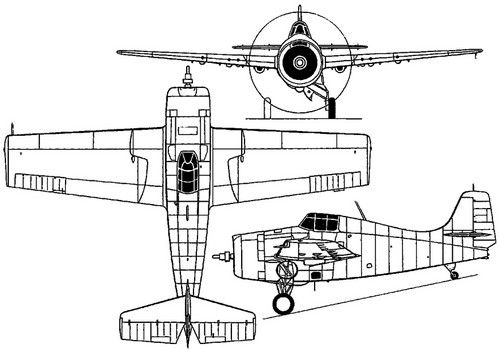 This Wildcat aircraft is preserved and seen at The Fantasy of Flight museum in Florida (USA). FM-2 Wildcat with BuNo 86741. (FAA registration N222FM )

This Wildcat aircraft was seen at Nellis AFB (USA).

This Wildcat FM-2 was a later version and this aircraft has Bu no.16161. It  was built by General Motors' Eastern Aircraft Division. Later during the Second World War when better aircraft were available, Wildcats also served as trainers throughout the war like from the converted paddle steamers USS Wolverine and USS Sable at  Lake Michigan.

This restored Wildcat finished in the markings of  the Carrier Qualification Training Unit, Glenview, Illinois around 1945 was seen at the Pima museum, Tucson (Az.)

This Wildcat is a FM-1 F4F-3 flew mostly in Olathe Kansas during the Second World War. Now it is painted in a scheme of CVE-23 of USS Breton. This Wildcat is on display at the Smithsonian National Air and Space Museum, Washington D.C.

This FM-2 Wildcat s/n 55627 and construction no 3268 has been owned and displayed at various museums including Duxford U.K in the 1980s. Registered N47201 it was seen at the Palm Springs Air Museum, Palm Springs, Ca. (USA).

In 1/72 scale, numerous kit were issued including very old ones by Revell, Airfix and Monogram and nowadays far better kits are available from Hasegawa and Academy. In 1/48 scale Tamiya, Hasegawa and Hobbyboss have nice kits. In the large 1/32 scale, Revell had a kit but now Trumpeter has a better kit.

This walk around page was first created November 2013 by M. de Vreeze