The Mariner was developed as a patrol flying boat just before the Second World War by Martin. First flight was February 1939. Several versions were developed but during the war in the beginning no large numbers were produced. After the war, many were used by the US Coast Guard but also during the Korean War. It was also used by other militairy services, including the Dutch Naval Air Service MLD. More that 1,300 planes were produced. 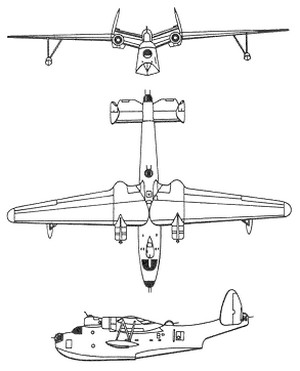 This PBM-5A Mariner was the fifth of the PBM-5A's built and deliver to the US Navy March 1948. The PBM-5A was an amphibian with retractable landing gear with two R2800 engines of 2,100 hp. This plane no.122071 is located at the Pima Air Museum, Tucson AZ.

Some scale models exist of the Mariner, but these were often old ones at odd scales. There was also an old Rareplanes vacuform in 1/72. In 2013 Minicraft released an excellent Mariner model in 1/72 scale.

Mariners were also used by the Royal Netherlands Naval Air Service (MLD). Enthusiasts and historians may look at the historical details of this type at our  NedMil pages here....