The Grumman F7F Tigercat was designed as a twin engined US Navy fighter with development starting during the Second World War. It got four cannons and four machine guns and it had a top speed over 740 km/h with its two Pratt and Whitney R-2800 Double Wasp radial engines. It was a rather heavy aircraft and was used after the war in Korea. Eventually, jets appeared filling the same role. Tigercats were than used as drones. 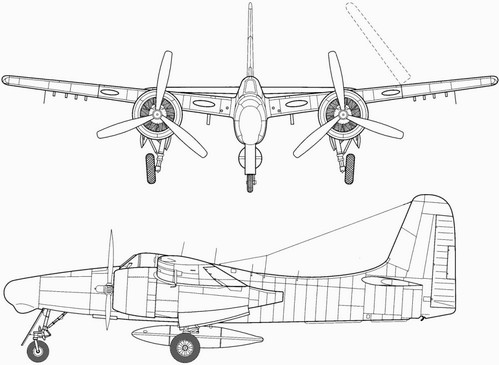 
This aircraft with serial 80390  is at the Palm Springs Museum, Ca. (USA). It has been carefully restored with nick name King of Cats and is privately registered as NX207F.

The same aircraft as seen by Cees later in November 2016:

This Tigercat with serial 80410 is shown in a Marines scheme of VMF-312 coded WR. It is on display at the Pima Air and Space museum at Tucson, Az. (USA)

Old plastic scale models from Monogram / AMT / Revell were available and from Aoshima in 1/72 and later on Pavla/Octopus issued a nice 1/72 scale model. In 1/48 scale AMT/Monogram and also Italeri have kits. Miniwings has 1/144 kits.

In 1/32 scale HPH has released a fine but expensive mixed media kit. (there was also a very old ID models vacuform in the past).