The Douglas DC-3 was a revolutionary design that emerged in the nineteen thirties as it had an all metal construction.  It had two engines driving 2 propellers with a large cabin for apssenger transport. The designation "DC" means for "Douglas Commercial" and TWA airline was the big driver behind its design. The DC-3 used experience from the previous DC-2 from 1934. The Douglas C-47 Skytrain or Dakota (RAF designation) is the military version and was used in the Second World War in very large numbers. The C-47 got a large cargo door and a strengthened floor.  Early-production DC-3 civilian aircraft used Wright R-1820 Cyclone 9s engines, but later aircraft (and most military C-47 versions) used the Pratt & Whitney R-1830 Twin Wasps After the War many were still used for decades. Also the Royal Netherlands AF used the C-47. 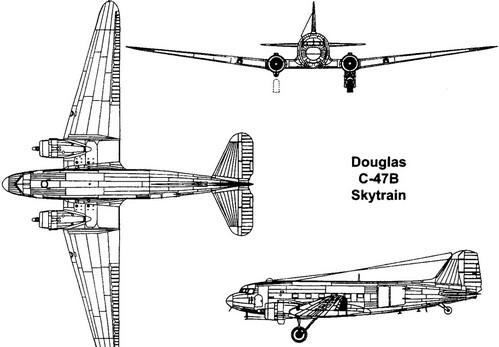 This DC-3 Dakota with registration N103NA was seen at Flabob airport, USA

These older photo's show DC-3's seen at the Brussels museum and Dusseldorf (D).

A large number of plastic scale models has been issued by many manufacturers. The very old 1/72 Airfix kit has now been superceeded by a very good brand new Airfix kit. Other 1/72 models were from ESCI and Italeri and the Soviet licensed Li-2 is made in 1/72 by Amodel. In 1/48 Revell/Monogram have kits and also Trumpeter.

In 1/144 Eastern Express and Welsh had kits. In 1/32 HpH has a very big resin / fiberglass kit (though expensive).

This walk around page was first created Summer 2014 by M. de Vreeze