The PZL 104 Wilga is a Polish designed and built short takeoff and landing utility aircraft designed for glider towing and parachuting training. The first one flew in 1962. Several engines were used in several versions with small changes. It was exported to dozens of countries over the World with over 1,000 aircraft produced until 2006. 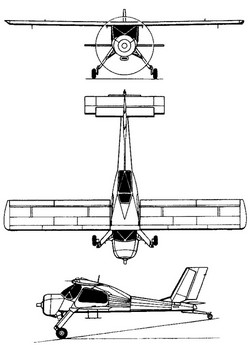 This PZL 104 Wilga is of the Polish Aeroklub Wrocławski. Seen here on a grass field in Poland and it has registration SP-EBK serial no 61123.

Only a few plastic scale models were available , such as the Amodel 1/72 kit.