The Partenavia P.68 is an Italian six-seat, twin-engined, high-wing monoplane. Its prototype flew in 1970 with production started in 1972. Most aircraft are for private business use but also small numbers are operated by police forces and smaller air forces for observer duties. In 1979 came the P.68C variant with longer cabin and longer nose that got a weather radar. A turbocharged version (the P.68C-TC) was available in 1980. Its maximum speed is about 320 km/hr and its range is 2100 km. The type license was obtained by Vulcanair. 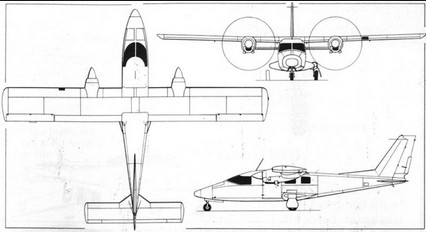 This aircraft had a German registration D-GDVK and is a Partenavia P-68C (serial 212). It was seen at vliegveld Texel, The Netherlands.

Are there any plastic scale models ?

this walk around page was created November  2014 by M. de Vreeze ;   note the Copyright!