The Grumman company developed in the sixties the E-2 Hawkeye airborne early warning (AEW) aircraft for use from carriers by the US NAVY.  Grumman had previously developed its predecessor, the E-1 Tracer based on the Tracker. The E-2 is a twin-turboprop aircraft  and was a much larger aircraft with much more capable equipment. The radar disk on top rotates and it has a large fuselage for the system operators. It has because of the large radome an unusual tail configuration. It entered service in 1964. The E-2C was a modernized version and the latest version is the E-2D, which first flew in 2007. The Hawkeye was used in several conflicts from US carriers. Small numbers were also sold to foreign air forces for land use like Japan, Israel, Taiwan and Singapore but often with somewhat less sensitive systems. 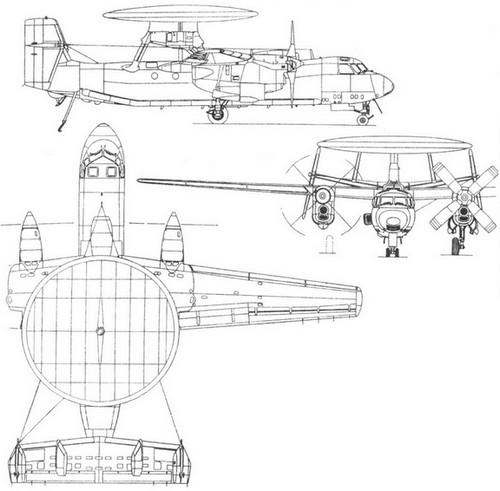 This E-2C of VAW-123 with serial 164494 was the last to launch from USS Enterprise (CVN-65) prior to her inactivation. Seen at the National Naval Aviation Museum, Naval Air Station Pensacola, FL.

Only a few plastic scale models exist of the Hawkeye with the old 1/72 model of Fujimi and now the far better Hasegawa kit.  In 1/48 Kinetic has a nice plastic model kit.

This walk around page was first published January 2015 by M. de Vreeze.