The Hawker Hurricane fighter played a vital role in the Battle of Britain and eventually in many other theatres of World War Two. Designed by Sidney Camm in the nineteen thirties, the prototype Hurricane flew on November 1935. It had been based on the design of the Fury plane built by Hawker and was powered by a Rolls-Royce Merlin engine. In February 1936, the Hurricane exceeded all of the demands placed on it and on June 3rd 1936, for the Royal Air Force of Britain, the Air Ministry placed an order for 600 Hurricane fighter planes. In October 1937, the first flight of a production Hurricane took place. By the end of 1938, 200 Hurricanes had been delivered to the RAF's Fighter Command. In September 1939, 19 RAF squadrons had been equipped with Hurricanes. Against the German attack on the British isles, the Battle of Britain in 1940, the Hurricane played a major role in the battle. Others were deployed in the Middle and Far East. 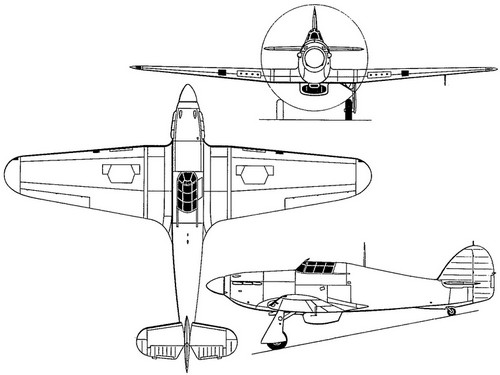 This Hurricane Mk.IIb  has codes "Z2315/JU-E" and is painted in the colours of RAF No.111 Squadron during the Battle of Britain. Located now at the Imperial War Museum Duxford, UK.

This Hurricane is finished in a "Finnish air force" WW2 scheme. It is a re-built from the hulk of a Canadian-built Hurricane Mk.IIb. It crashed in Canada in 1941, was re-found in 1990 and has been under restoration since then. Now finished, this "new" Hurricane is painted according to an original aircraft HC-465.

This aircraft was seen at the Texel Air Show at the Island of Texel/ The Netherlands Summer 2015.

Many many plastic scale models are available, too much to list all. In 1/72 nowadays Airfix has a very good model and in 1/32 Pacific Coast Models. The old 1/24 kit of Airfix was an exciting kit in its days, now Trumpeter has a 1/24 kit.

this walk around page was created November  2014 by M. de Vreeze ;   note the Copyright!