The Westland Lysander was designed in the mid-1930s in Great Britain as a two-seat army cooperation airplane and designed for Short Take Off and Landing, the Lysander could land and take off in the length of a football field. Aerodynamically very advanced , it had automatic wing slats, slotted flaps and a variable incidence tailplane, giving it a very low stalling speed.

Its first flight was in June 1936. It could carry some armament like 0.303 in Browning machine guns operated by the pilot, in each wheel spat and a free Browning at the rear station. Twelve small bombs could also be carried under small stub-wings fitted to the spats. Over 1,300 Lysanders were built by small firms. The RAF Lysander III was fitted with a long-range fuel tank and a side ladder, and used to transport Allied agents into enemy occupied territory. 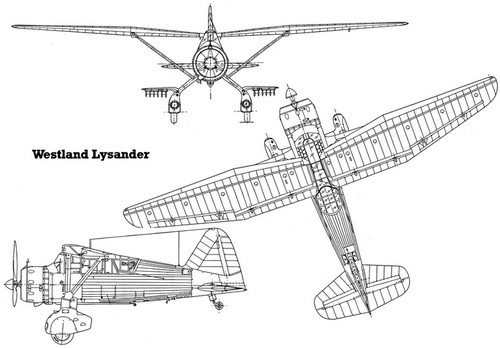 This Lysander mk.III aircraft , code "R9125",   is in the Battle of Britain hall at the RAF museum Hendon, London, UK.

A few plastic scale models exist of the Lysander, like the 1/72 kit of Airfix, Matchbox, and now a nice PAVLA kit. In 1/32 scale Matchbox Lesney UK released a pretty nice kit.