The Curtiss P-6 used race plane experience of the nineteen twenties and the P-6 designed as a fighter. The name Hawk - 1 was for export with aircraft almost identical to the American USAAC aircraft. A jettisonable belly fuel tank could be fitted to double the very low flying range. The intention was with the tank to fly to the target and then to drop the tank before the fight for better maneuverability. In practice, this was not very reliable.

The Dutch army air force (ML-KNIL) in the Dutch East Indies needed a fighter and 9 aircraft were ordered with a Curtiss Conqueror V-1570C engine with 630 hp. The Dutch Aviolanda company license built and additional 6 aircraft , delivering these beginning nineteen thirties to Java. In 1938 only three aircraft remained that were used for training duties. 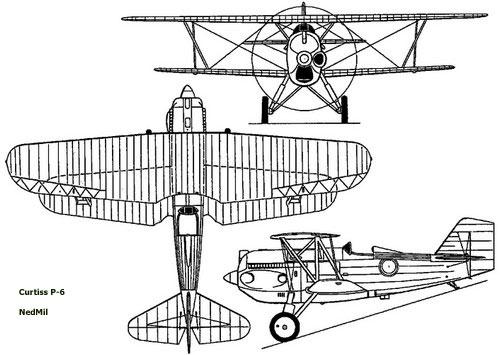 This P-6E aircraft is actually a replica made for Dutch museum NMM. The replica was made by Cradle of Aviation in New York. The plane has the "C-319" registration. The former real aircraft it represents was license made by the Dutch company Aviolanda and the replica shows this on the tail. It is now on display at the new Dutch National Military Museum (NMM) at the former Soesterberg airfield, Soesterberg, The Netherlands.

A few scale models exist of the P-6 Hawk. In 1/72 scale of Olimp and Monogram but need conversion. In 1/48 scale vacuforms by LoneStar and Classic Airframe  and there is a very nice but expensive Silver Wings model i9n 1/32 scale.