The Cessna  model 337 "Skymaster" has two Continental IO-360 engines of 210 hp set in a tractor - pusher configuration. It first flew in 1966. A military version with designation O-2 was used in the Vietnam war for many duties, including forward air control.  After the war, US military used it well into the eighties. It was also used by many foreign air forces. Also in civilian use, the Skymaster was extensively operated and flown. 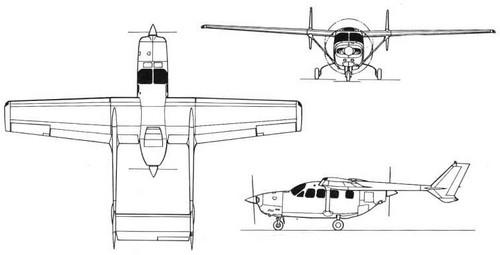 This O-2A aircraft was seen at Nellis, Nevada USA. It has a Vietnam grey scheme but is now privately flown.

This O-2 aircraft was seen in a dark black night ops scheme with red markings. It is at the Armament museum at Eglin.

This O-2A coded 67-21413 has the typical USAF old style paint scheme (see Paint info below). It was seen at the Castle Air museum, Atwater, Ca.(USA).

This is a former USAF O-2A "67-21300" that flew during the Vietnam war and the aircraft was one of the first batch of 145 aircraft ordered at Cessna. This particular American USAF O-2 was also flown by an Australian pilot during the Vietnam war, hence the small kangeroo on the nose. It has been preserved and is now flown by the Postbellum Foundation from Teuge airfield, The Netherlands were it was seen.

In 1/72 scale kits were from Aurora and Arii but these were basic and the old Airfix is better. In 1/48 scale there was an old Hawk kit but now a better Testors/Italeri kit. Roden has released a 1/32 kit end 2017.

This walk around page was first created September 2015 by M. de Vreeze