The Kawanishi N1K2-J Shiden-Kai was designed as a floatplane fighter and flew May 1942 in Japan. It later got a conventional undercarriage and got the Allied name "George". The Shiden Kai possessed heavy armament as well as surprisingly good maneuverability, and it could compete against the best late-war fighters but it arrived late into the Pacific war. 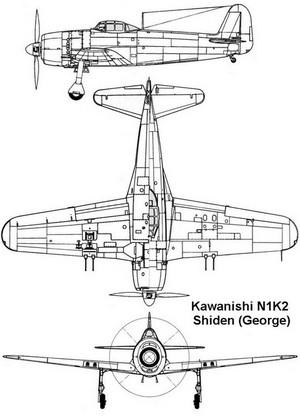 This aircraft is at the National Museum of Naval Aviation in Pensacola, Florida.

Many scale models exist of the "George" in various scales. Bandai had a 1/24 kit and Hasegawa in 1/32. Hasegawa also has several 1/48 kits and Tamiya in 1/50. In 1/72 Aoshima and Hasegawa amongst many others have plastic scale model kits like Kopro.