The Blenheim was developed as a light bomber by the Brtish Bristol company in the nineteen thirties with first flight in 1935. It was one of the first aircraft to use metal in big part of the structure and got two engines and a crew of three. A small bomb bay was used with some machine gun armament. During particularly the beginning of the Second World War bombing misisons were done but later the Blenheim was also used for reconnaissance missions and even long range fighter. Several versions were developed with also different looking nose sections. Over 5,000 Blenheims were manufactured and many countries used the type including Finland, France, Greece, Australia and others. 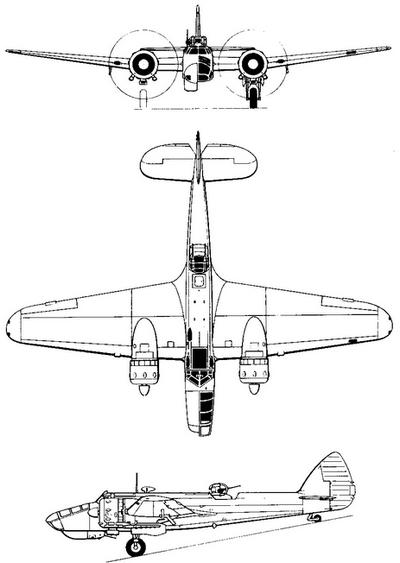 This Blenheim I was the light bomber version with 2 Mercury VII engines and a max bomb load of about 1,000 lb/450 kg .  This aircraft "10201" was built in Canada in 1943 called the "Bolingbroke". It is now in a scheme of RAF no.23 squadron as a night fighter as seen at the Imperial War Museum at Duxford (U.K).

This Blenheim VI was an improved armoured light bomber version with 2 Mercury XV engines and a max bomb load of about 1,000 lb/450 kg and 320 lb externally. This aircraft was seen at the RAF Hendon museum in London in a RAF scheme of 139 squadron coded L8756/XD-E.

This aircraft is a Blenheim mk.IV T with construction no 88027 / 9895 manufactured in 1942. It flew in Canada with the armed forces. Restored and now coded  XD-A, no. 10038, it is preserved at Brussel museum ("Musée Royal de l'Armée") at the Jubelpark in Brussel (Belgium).

Several plastic scale models are available. In 1/72 scale FROG and Airfix had an old kit but now a very good new tooled model is available from Airfix. Hasegawa/Revell were reboxed FROG. Other 1/72 models were "copies?" like those from from Cooperativa, Eastern Express, ModelCraft , NOVO/Frog and MPM with short-run.

In 1/48 scale Classic Airframes has a short run kit and ARBA a resin kit. In the smaller scales Zvezda has a 1/200 model. No 1/32 scale model is known.

This walk around page was first created January 2016 by M. de Vreeze