The Junkers Ju-87 was designed as a dive bomber by the German Junkers company and first flew in 1935. It had an inverted gull wing and later was known as the Stuka. It was produced in large numbers and not only used in the Second World War but also the Spanish Civil War. Thousands were manufactured in many versions and it proved successful in its role. 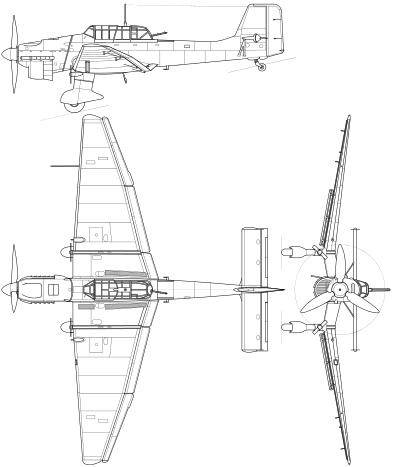 This aircraft Ju-87 G2 has code " RI+JK" . It is probably built in 1943 as a G5 but got two 37mm cannons fitted as an anti-tank and anti-personnel aircraft, with new werke nummer as the G2.  It was captured May 1945. This aircraft is located at the RAF museum in Hendon in London (UK).

Many scale models of the Stuka have been issued. In 1/144 for example by Revell and later by Eduard. In 1/72 scale many kits were available with the Airfix , Revell, Heller, Fujimi and many others.  In 1/32 by Revell, Hasegawa, Special Hobby, Trumpeter and others. In 1/24 the classic Airfix kit but now also from Trumpeter. Many after market sets are also available.