The German Heinkel He 219 was designed as a night fighter in 1930s and early 1940. Development was troubled by different opinions and the aircraft had several innovations like a simple radar and simple ejection seats. First flight was end 1942. Called the Uhu, the type was introduced in the German Luftwaffe in the later stages of World War II. Usual armament were 2 cannons in the wing root and additional cannons in a ventral weapons bay. Tactics employed "Schrage Musik" were enemy bombers were fired upon from below during nght attacks where the bombers were found with the on-board radar.  The Uhu was a relatively fast aircraft and probably about 300 were actually built in different versions and the aircraft proved effective for its role. 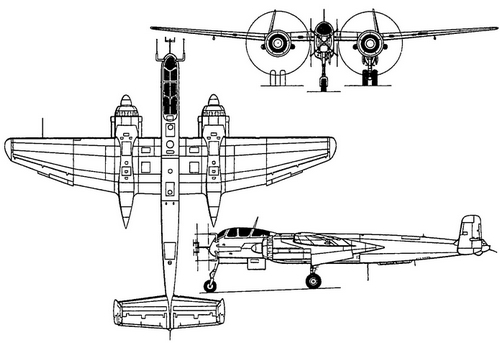 
This He 219 A-2 Uhu has Werknummer 290 202 . Currently, it is undergoing restoration at the Smithsonian at Dulles Airport (Washington DC). Several parts are seen but the whole aircraft is not yet completely restored nor assembled.

Quite some scale models exist of the Heinkel He 219. Older 1/72 kits were from FROG, Lindberg Revell, Matchbox but better kits were later from Dragon and Hasegawa and an new Revell model. In the scale 1/48 Tamiya has a nice kit. In 1/32 rudimentary vacuforms of Combat Models and ID Models appeared, but Revell issued a brand new good kit in 2012 as well as Zoukei-Mura though the last one is quite expensive.