The Dewoitine D-27 was designed as a light parasol monoplane fighter developed in 1928. It had a Hispano Suiza 12 engine and was originally produced by Dewoitine in Switzerland and 66 aircraft were produced for the Swiss Air Force. After structural failure of a D-27 prototype, the structure has been reinforced and the new aircraft was renamed D-530. 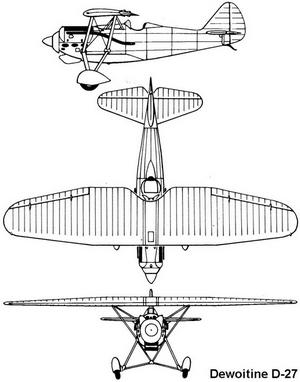 
This Dewoitine D.530 is no.6 (registration F-AJTE). It was used for air shows to show aerobatics. It is on display at the French Musee de 'Air et de l'Espace at Le Bourget airport, Paris.