The Curtiss SB2C was designed as a carrier-based dive bomber aircraft. It was a replacement of the Dauntless and first flew end 1940 before the USA was drawn into the Second World War. During development several changes were required and no sooner than end 1943 it entered US Navy service. It operated mostly in the Pacific during the war against Japan. 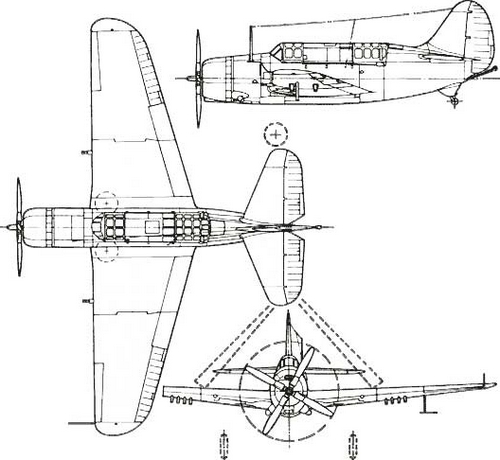 This aircraft coded "208" has Bureau no. 83479. The SB2C-5 had a greater fuel capacity than earlier versions. This aircraft was delivered May 1945 but the war ended before it saw combat. Mid 1948 is was set out of service and kept for various display purposes. After being restored, it is on display at the Smithsonian National Air and Space Museum , Steven F. Udvar-Hazy Center in Chantilly, Virginia.

In 1/144 kit were from Crown, Arii. 1/72 scale, plastic scale models were released by Airfix, Matchbox, Sword, Lindberg, Entex, Cyber Hobby and Academy. In 1/48 from Monogram-REvell, Hasegawa, Accurate Miniatures, In the large 1/32 scale HpH has an expensive but greatly detailed resin model. In the HPH/ Infiniti range a 1/32 kit was released in 2020.