The Nord 262 Fregate was a French twin-prop high-wing airliner. The prototype first flew mid 1959 but the design was significantly changed that later resulted in 1962 into the "Fregate". It had 2 Turbomeca Bastan VI engines of 1080 hp, giving it a maximum speed of 385 km/hr.  (Nord Aviation merged into the Aérospatiale company in 1970). It was also adapted by the American company Mohawk that made some changes for the US market with Type 298.

Aircraft were used by both airlines but also military. Some 110 aircraft were manufactured. 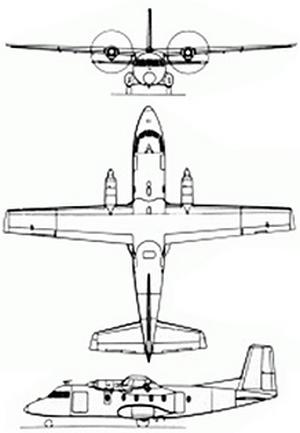 This Fregate 262E is a version with a maritime scan radar and used for maritime surveillance. This aircraft no. "72" of the French MARINE is on display at the Le Bourget museum "Musee Air et Espace" at Paris.

Only a few models exist. In 1/72 scale vacuforms were released by Broplan.