The  Nakajima Ki-43 was a fighter designed end 1930s and was to be used from land bases. Several modifications were made to make it an acceptable aircraft. Having the Japanese name Hayabusa it was callied by the Allies the "Oscar". Almost 6,000 aircraft were manufactured in several versions  and in the Second World War it was in the Pacific theatre the most successful Japanese Army fighter. 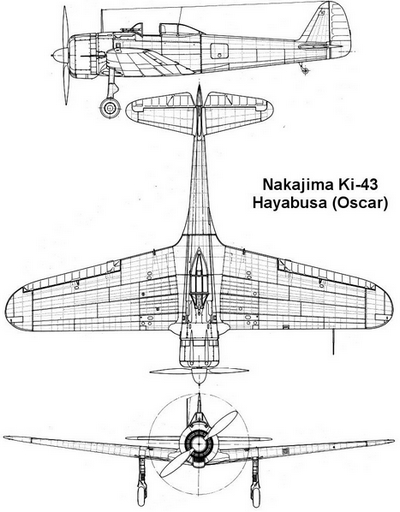 This is a very rare Nakajima Ki-43 II Hayabusa as it is an orginal aircraft. Several Japanese aircraft were abandoned at Java Indonesia after the Second World War's end. This aircraft is on display at the Indonesian Air Force Museum "Pusat TNI AU Dirgantara Mandala" at Yogyakarta in Central Java, Indonesia. During the conflict in 1947 to gain independence by Indonesia after the Second World War, it was intended to be used by Nationalists but it had engine problems so probably did not fly. It has the code "H-45".

This Ki-43 IIb (c/n 6430) was probably manufactured end 1942 by Tachikawa in Japan. It flew with no.63 sentai in occupied Dutch Nieuw Guinea at Hollandia during the Second World War. It was captured April 1944 and restored to fly and went to the USA. It was on display at Kirtland and later was acquired in 1959 by the National Air and Space museum. It is on loan and on display at the Pima Air Museum near Tucson (Az.).

Many plastic scale models of the Ki-43 have appeared over the years. In 1/144 scale by LS, Mitsuwa and Revell. In 1/100 scale by Doyusha, Fuji and Sanwa. In 1/72 many many kits such as from old kits from Arii, AML, LS, Revell and better ones from Fujimi and Hasegawa. In 1/48 by Arii, Otaki, FineMolds and Hasegawa. Large scale 1/32 kits are from Hasegawa and also released in a new box by Revell.

This walk around page was first created January 2017 by M. de Vreeze