The Grumman OV-1 Mohawk was  designed for army observation tasks in the 1950s. It had a large glass canopy for the 2 man crew and a being a twin prop with STOL capability it could fly from short, unimproved runways. Normal speed is about 300 km/hr and it could be lightly armed. A few versions were developed. Some versions had a large canoe with the Side Looking Airborne Radar below the fuselage. The Mohawk was used in the Korea war but particularly a lot during the Vietnam war. Some 375 OV-1 aircraft were manufactured and a few exported and used in Israel and Argentina. The Mohawk soldiered on with US forces even until 1996 also being seen in Europe. 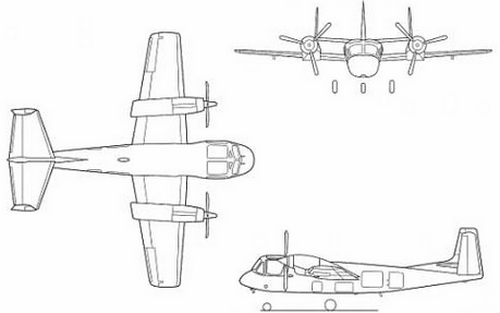 This OV-1A aircraft is flown aircraft at the Chino Planes of Fame museum with civil code "N4235Z. It has markings for an olive drab US ARMY aircraft coded "59-604". It was seen at Chino airport, CA. USA.

A few plastic scale models are only available. For many years only the good old Hasegawa / Minicraft kit was available and also seen in a FROG box. In 1/48 a kit was released by Collect Aire with now a good Roden kit.