The Short Tucano is a two-seat turboprop basic trainer built by Short Brothers in Belfast, Northern Ireland. It is a licence-built version of the Brazilian trainer Embraer EMB-312 Tucano from 1980. The design was adapted for Royal Air Force requirements. The Short version flew first in 1986 and had a stronger airframe, revised engine with four bladed propeller, other wing tips and some other updates like a changed stronger canopy. It has two Martin Baker MB 8LC ejection seats. The first RAF Tucano was delivered in 1989 and it replaced the Jet Provost with some 130 Tucano's being delivered. Some Tucano's were also exported. (and the EMBRAER Tucano production exceeded 650 aircraft). 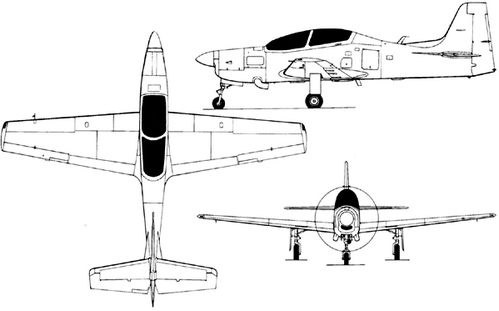 This RAF Tucano coded "ZF1377" has also a black gloss finish. It was seen at the Texel Air Show (NL).

Another Tucano was also at this show and it had a Battle of Britain 72 squadron memorial camouflage scheme.

Only a few plastic scale models are available. In 1/48 scale Tucano from Alley Cat and in 1/72 by Airfix and an old Premiere kit.

(of the EMBRAER Super Tucano Hobbyboss and AVM Scale have 1/48 kits and in 1/72 Duarte had a resin kit).

This walk around page was first published January 2017 by M. de Vreeze