The Ryan NYP with name "Sprit of St.Louis" is a singel engined long range monoplane built for a unique record attempt. NYP means "New York to Paris" and experience with the Ryan M-2 mailplane was used to made this unique aircraft. The engine was a Wright J-5C Whirwind radial engine of 223 hp and the aircraft was fitted with large fuel tanks. View forward was limited and a small persicope was added. The "Spirit of St. Louis" is the aircraft in which Charles Lindbergh made the first historic 33 hour nonstop solo transatlantic flight. He flew May 20, 1927 from Roosevelt field, Garden City, New York to arrive May 21 at Paris Le Bourget airport over a distance of 3,600 miles. After the crossing he made with the Spirit of St.Louis a US tour and also a goodwill flight to Central and South America. Flags of the visited countries were painted on the cowling.

(only one additional NYP was made in 1927 and that NYP-2 was used for promoting a Japanese newspaper. But this aircraft crashed in 1929). 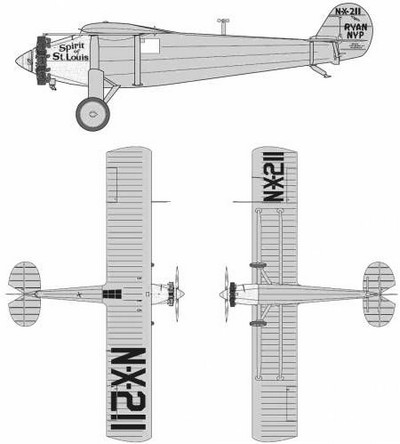 This unique aircraft "Spirit of St.Louis" has registration N-X-211. It is from 1928 on proud display at the National Air and Space Museum, Washington (DC), USA. The somewhat yellow sheen on the cowling is caused by protecting varnish, on the flying aircraft it was bare metal.

A few scale models exist of "Spirit of St.Louis". In 1/100 Faller had a kit and other odd scaled models appeared. In 1/72 old kits are from Hawk/Testors, from FROG (released in various other brands like Novo). RSW models has a good 1/72 kit. Lindberg had a 1/48 kit as well as AJP Maquettes, with a new 1/48 Revell kit released in 2005. A rare expensive 1/32 model is from Marsh Models/Aerotech.

This walk around page was first created March 2017 by M. de Vreeze