The Mitsubishi J2M Raiden (雷電, "Thunderbolt") was a single-engined land-based fighter aircraft. Designed by the same designer as the "Zero" during the Second World War with first flight of the J2M in March 1942. Development was hampered by engine problems of the Kasei 23a engine. The type was ready for deployment beginning 1944 and the Raiden was used by the Imperial Japanese Navy Air Service in World War II. Usual armament was 4x 20mm cannons. It was to cope with the B-29 bombers flying over the Pacific and Japan but it had insufficient performance at altitude as it had no turbo charger. Probably over 650 Raiden aircraft were manufactured. 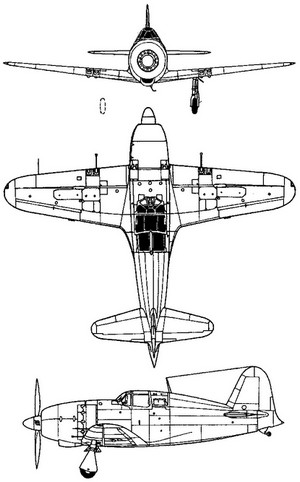 This J2M3 aircraft has serial no "3014". It was seen at the Planes of Fame museum in Chino. (probably the sole survivor ?)

Various plastic models appeared over the years in various scales. To list a few: in 1/144 scale AHM, LS and Gunze Sanyo/Revell had kits. In 1/72 kits with old ones from Tamiya, from Nichimo, Hasegawa and a later kit from Sword. In 1/48 kits are from Arii, Otaki, Hasegawa and Tamiya had a 1/50 kit. In 1/32 Hasegawa has a nice kit, replacing than the very old Revell offering from 1971. A very good 1/32 kit was released in 2013 by Zoukei-Mura.

This walk around page was first created March 2017 by M. de Vreeze