The German Junkers company designed a transport aircraft in the end 1920s/ beginning 1930s. The type Ju-52 had a metal construction using corrugated aluminium skin panels. Experience with the F.13 was used in the design. The Ju-52/1m was a single engined aircraft but was underpowered and soon 3 engines were fitted, resulting into the Ju 52/3m. Various engines and cowlings could be choosen. The German airline Luft Hansa ordered the type and the cabin had usually 17 passenger seats. The Ju-52 also saw large military usage. It was deployed during the Spanish Civil War from 1936 in both a transport and even bomber role. The German Luftwaffe had in 1939 about 500 aircraft and used the type for transport but also paratroop droppings. More aircraft followed for the Luftwaffe and though vulnerable, it was an important type during the Second World War.

After the war the Ju-52 continued in postwar service with military and civilian air fleets. Nearly 5,000 aircraft were manufactured. 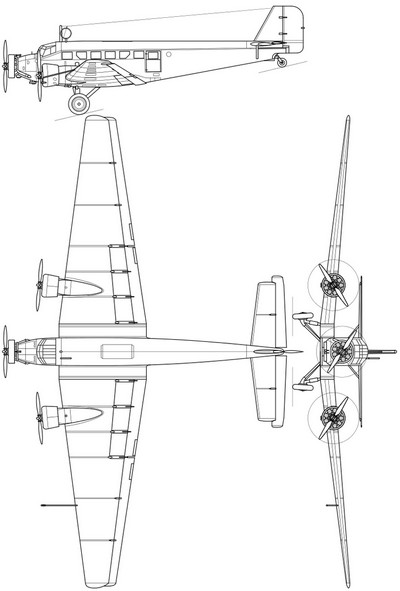 This is a Junkers (CASA) Ju-52 / 3m. This airliner 17 passenger version was license manufactured by the Spanish CASA as 352-L. This aircraft is in a Luft Hansa livery with registration "D-ADLH". Seen at Smithsonian National Air and Space Museum, Steven F. Udvar-Hazy Center in Chantilly, Virginia.

Many scale models in plastic have appeared over the years in many scales. In 1/100 from Faller and in 1/144 from Welsh vacu, Revell and the latest kit is from Eduard. In 1/72 from Airfix in 1965, Heller and Italeri / Revell. In 1/48 the big Monogram and Revell kit. In the large 1/32 scale a vacuform from Combat Models is known.

This walk around page was created March 2017 by M. de Vreeze