The French Farman was one of the first aircraft manufacturers in the early days of aviation around 1908. One of the first types of aircraft was the HF.20 biplane. It could carry two men in a gondola and it had a linnen and wood construction. It had a pusher prop so particularly the observer which sat in front had a good view. When used as a military aircraft he could fire the installed machine gun.

The type was also license built by the Dutch company Trompenburg (known through the Spijker cars) of the business man Henri Wijnmalen. 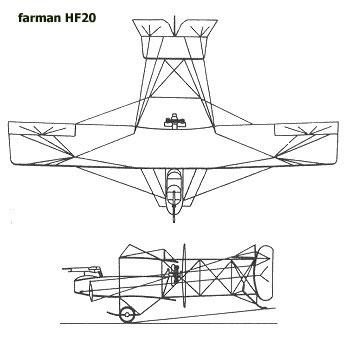 This is a fine replica of a Farman HF.20 as used by just established Netherlands Air Force, "Luchtvaartafdeeling" (LVA). It has the code LA-2 and was one of the first aircraft used. The real 'LA-2" was delivered to the LVA October 1913 and flew until September 1915 with it had an accident.

The replica is on display at the Louwman museum in Den Haag, The Netherlands. This museum is a car museum but also a few aircraft replicas are on display.

A few scale models have been released of the Farman HF.20 such as the 1/72 models of Omega and Ludemann.

Dutch Military aviation enthusiasts can look at info about the real LVA Farmans at our IPMS pages here....

This walk around page was created April 2017 by M. de Vreeze ;   note the Copyright!