The Wright Flyer of 1903 was the first successful heavier-than-air powered aircraft or to quote: "the first powered, heavier-than-air machine to achieve controlled, sustained flight with a pilot aboard" . It was designed and built by the Wright brothers and they flew it four times on December 17, 1903. The location was near Kill Devil Hills, about four miles south of Kitty Hawk, North Carolina, USA. The fourth flight that day was 852 feet long and took 59 seconds.

The Flyer used first "glider experience" and it was constructed with spruce wood with wires as rigging. A special light simple engine was made from scratch by Charlie Taylor and a bicycle like chain drove the twin propellers. Steering the craft was done by twisting and warping the wing.

The pioneering work of the Wright Brothers led to the beginning of Aviation as we know it since than. 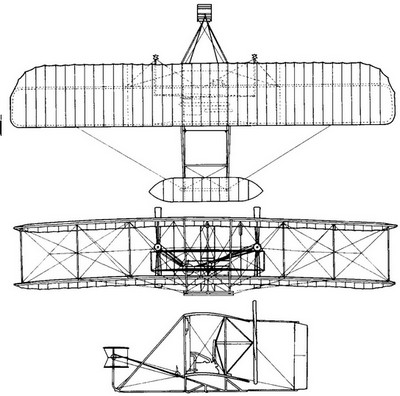 This is the original Wright flyer I of 1903. By the Smithsonian team it was after the Second World War disassembled, documented, cleaned and carefully restored with the original parts. In 1985 it was decided to replace the worn fabric as it was not original anyway as the Wright brothers replaced that fabric in 1928. It is on proud display at the Smithsonian National Air and Space museum in Washington DC. USA.

Many kits have been released of the Wright Flyer though many are quite basic with no or thick wires/rigging and in odd scales. Monogram had a 1/39 kit and later Renwal a 1/72 kit. The 1/16 museum model of Hasegawa is phenomenal.

This walk around page was first created April 2017 by M. de Vreeze