Walk around - Ford AT-5 tri-motor

The Tri-motor was designed in the early 1920s as a passenger transport by the Stout aircraft division, a company of Ford. It was revolution in aircraft design as it had an all-metal construction and had 3 engines. Various versions were developed. The AT-5 version of 1928 was larger and had three Wasp engines. Known as the "Tin Goose" it was the largest civil aircraft in America when it started passenger services on August 1926 with Stout Air Services. It was noisy but quite reliable and important for the futher development of passenger airlines. It was also used by many Air Forces across the Globe.

The RR-5 is a navy designation. Some 200 Trimotors were built. 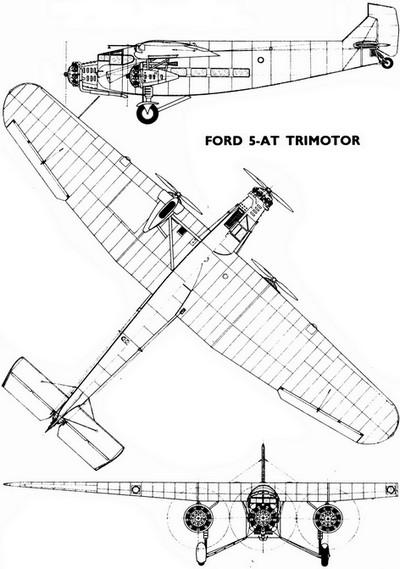 This AT-5-B Tri-motor c/n 39 is of 1929 and bears registration "N9683". It was restored by a team of American Airlines in the scheme of "American Airways". It is on display at the Smithsonian National Air and Space museum in Washington DC. USA.

This aircraft "9206" was manufactured in 1928 as a AT-5. It flew with many airlines and operators. The aircraft seen here was donated in 1975 to the Naval Aviation museum at Pensacola. It is painted as a navy RR-5.

A few plastic scale model kits have been released of the tri-motor. In 1/72 there was the old Airfix kit of 1968 also released by MPC. Monogram had a 1/77 kit that appeared in various boxes. AJP Maquettes had probably a 1/48 kit.

This walk around page was first created April 2017 by M. de Vreeze