The Fokker 50 was a modernized further development of the famous F.27 Friendship mk.500 (designated F27 Mark 050). It got a new cabin interior with also many more rectangular windows, new systems and a new propulsion with two Pratt and Whitney PW125 / PW127 engines and six bladed propellers. First flight was in 1985 and airline service entry started in 1987. It was used by airlines but also a few air forces used the type F.27 mk. 0502 including the Royal Netherlands Air Force (KLu). Some 213 Fokker 50 aircraft were manufactured until the collapse of the old Fokker company in 1997. It was a reliable aircraft in the tradition of Fokker. ( A stretched version was the Fokker 60 that was developed for military transport ). 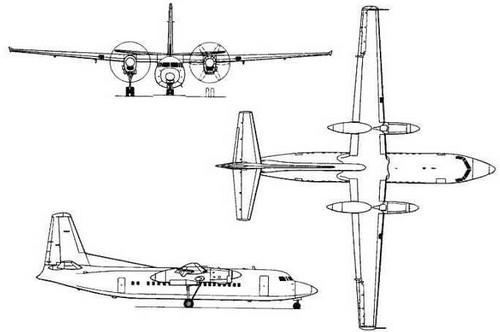 This is a Fokker 50 operated by the regional Cityhopper airline of KLM with registration PH-KVF named "Parijs". Seen at the maintenance KLM hangar at Schiphol Oost.

Plastic scale models are limited to a vacuform model in 1/144 of Welsh and a conversion set by Classic Plane in 1/72 to convert a F.27.

This walk around page was originally created April 2017 by M. de Vreeze