The Saab 340 was developed as a twin-engine turboprop aircraft for regional use. Also Fairchild in the USA participated in the project. The cabin in standard layout accommodated 34 passengers and economy cruising speed was about 250 MPH (460 km/u). First flight was January 1983. Several versions were produced, of the first Saab 340 A some 159 aircraft were manufactured. (Fairchild stopped in the program in 1987). The Saab 340 B had more powerfull engines and a wider stabilizer and about 300 were produced.

The type was used by over 50 airlines across the World. Also a few military versions were developed including an AEW version. Production stopped in 1998. 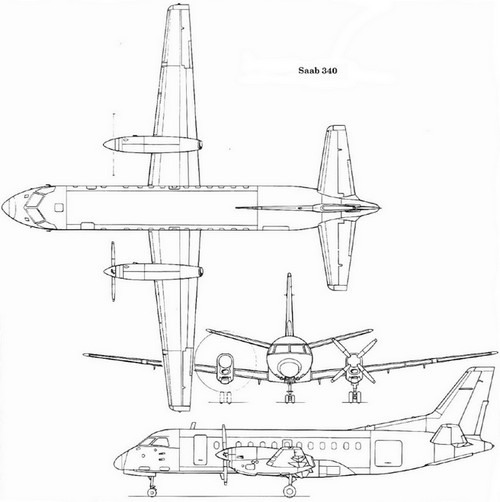 Here details of the Saab 340 aircraft of the KLM Cityhopper regional airline which had 12 aircraft, using the type from 1991 to 1998. Aircraft registered PH-KSD was seen at its home base as Schiphol Airport , East Side. Also a few photo's were made inside the KLM hangar of the PH-KSE.

There are a few plastic scale models of the Saab 340. In 1/144 from Welsh and Fox One. In 1/72 scale there was Kori vacuform, with later a Broplan kit and RVHP resin kits.

This walk around page was created May 2017 by M. de Vreeze ;   note the Copyright!