The Fairchild C-119 was designed based on the C-82, a twin engined twin boomed military transport. The C-119 first flew November 1947 and had US Navy designation R4Q. It has a large cargo hold for about 60 troops or 4500 kg loads with two large clamp doors at the rear. Its nickname was Flying Boxcar. More than 1,100 aircraft were manufactured until 1955 but several modifications were made in service. The AC-119 was an armed version as gunship for ground attack also used in the Vietnam war. Some aircraft had jetpods for better take-off. Some C-119's  were operated by cargo airlines and used for fire fighting. 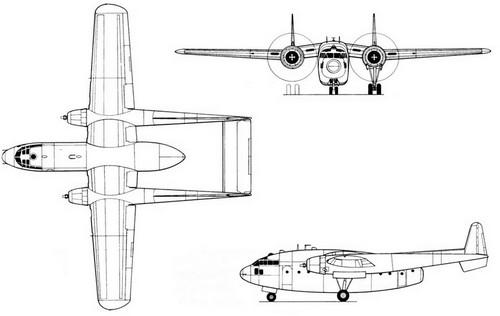 This is a C-119G with probably serial 254, CP46 / OT-CEH. It is an ex Belgium Air force aircraft, one of a fleet of about 46 aircraft. It is on display at the Brussels air museum at the Jubelpark in Brussel.

Several plastic scale models were released over the years. Aurora and Frog had old "about 1/77" models. In 1/72 scale, Italeri has a good model including also a AC-119 gunship. In 1/144 scale Roden and Welsh have models.