The Avro Shackleton was designed soon after the Second World War as a long range maritime patrol aircraft. It had a large bomb bay that could carry torpedoes, bombs and other things like rescue materials etc. The crew comfort on board was not very good with large noise levels inside. The Shackleton MR1 entered service in 1951 in the patrol and anti-submarine warfare role (ASW). The MR2 was an improved version with better radar and its retractable radome was moved aft of the bomb bay. Some major airframe modifications were done with longer nose and tail sections and a redesigned tailplane as compared to the MR1. Also a rear "look out" station with a glass cone was installed at the fuselage end. Other differences were the stronger undercarriage and twin rear tail wheels. Soon, the dorsal turret was removed. The MR3 would be the next version with also an anti-ship role. A considerable redesign was done with now a nose strut with twin wheels, deleting the rear wheel strut and making the fuselage nose deeper to accommodate a nose undercarriage. The first MR3 flew in 1955. Later a jet assistance Viper jet engine was installed, one in the rear of each outboard nacelle. The Shackleton also filled another requirement for the RAF: airborne early warning (AEW). Some 12 existing MR2 aircraft were refurbished and the first AEW flew in 1971. It got a large radar dome fitted under the forward bomb bay and various systems. All armament was completely removed. The AEW 2 was the last version operated by the RAF until 1991. 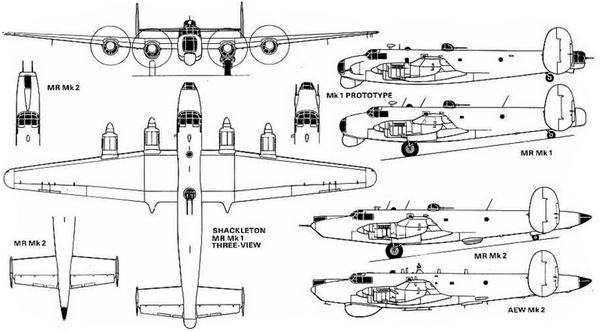 This aircraft is the Airborne Early Warning mk.2 version. It is a former Royal Air Force aircraft "WL790" /coded 80. It was seen at the Pima Air Museum near Tucson, Arizona.

Some plastic scale models were available. In 1/72 the old Frog kit (also reboxed by Novo, old Revell and others). Later on Revell released a brand new tooled kit and also Airfix has a series of brand new kits for the AEW 2 and MR2. Revell also released in 2020 a MR3 1/72 scale kit.

Also check out a comparison of the 1/72 kits researched by two IPMS NL members at this [external] website....

This walk around page was first created June 2017 by M. de Vreeze ;   note the Copyright!