The Fairey Gannet was developed for the British Fleet Air Arm for anti-submarine warfare from carriers. First flight was September 1949. It has a double turboprop engine driving two contra-rotating propellers. It could double fold its wings for stowage inside the carrier hangar. The mk. 1 was the first anti-submarine warfare version with some 180 manufactured and the T2 was a trainer version. The mk.4 was a modernized ASW version with the T.5 the trainer. A few aircraft were also used for transport duties. In the 1960s on a version was developed as airborne early warning, the AEW mk.3 with 44 aircraft manufactured.

Gannets were operated by the Fleet Air Arm (FAA) but also by Australia (for the carrier Melbourne), West Germany and by Indonesia. 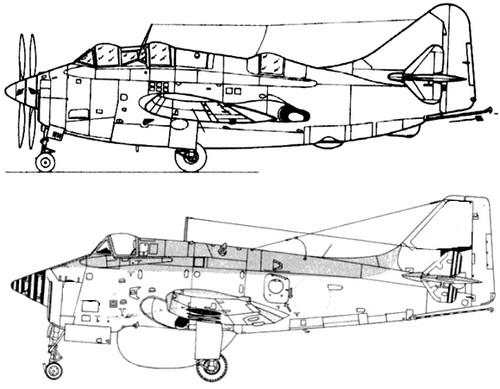 This Gannet Airborne Early Warning mk.3 version. It has a completely redesigned fuselage as compared to the initial anti-submarine versions and has a large radar below the belly. It was operated by the British Fleet Air Arm also from aircraft carriers in the Cold War. This AEW aircraft coded XL482 was seen at the Pima Air Museum near Tucson, Arizona (USA).

This Gannet ECM.6 was based on the AS mk.4 but fitted with ECM equipment. This FAA aircraft is coded XG797 and was seen at the Imperial War Museum at Duxford Airfield (U.K).

This is a Gannet T.2 dual control trainer (based on the AS mk.1). This aircraft coded XA508 was seen at the Midland Air Museum near Coventry (U.K).

This Gannet coded ANGK LAUT "105" was operated by the Indonesian Navy Naval Aviation. It is preserved at the Indonesian Air Force Museum "Pusat TNI AU Dirgantara Mandala" at Yogyakarta in Central Java, Indonesia.

Some plastic scale models were available of the Gannet of various versions. In 1/72 first there was the old Frog kit for a mk 1 or 4 (also reboxed by Novo and others such as Donetsk). In 2006 Trumpeter released a nice kit, followed by Revell with a very good kit in 2007. Of the AEW 3 version Alley Cat has a nice 1/72 resin kit.

In 1/48 there was a vacuform from Dynavector and now a Classic Airframe short run kit. Welsh released 1/144 kit.