The Dornier Do-228 is a short takeoff and landing utility aircraft. After the Second World War the German aircraft company Dornier restarted with small utility aircraft such as the Do-28 Skyservant. In the late 1970s a larger STOL turboprop was developed with a new TNT wing that could carry up to 19 passengers. First flight of the Do-228 was March 1981. It can be used in many roles both civilian and military. It is also manufactured under license by Hindustan Aeronautics in India. It is used by dozens of small airlines and air forces with over 350 aircraft manufactured. 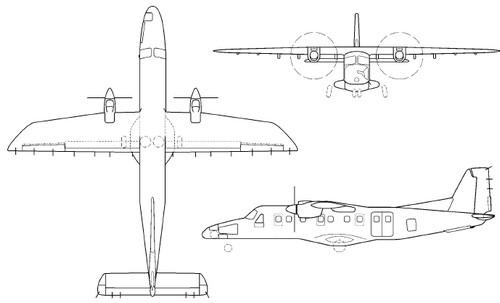 This Dornier 228 with registration PH-CGC is operated by the Dutch Coast Guard (Kustwacht) and is one of a pair. It has search, photo and monitoring equipment and flown by a mixed crew of military and civilians. It was seen at Texel De Kooy airport, Den Helder, NL

The only plastic scale models of the Dornier Do-228 were released by Revell in 1/72 scale. It is a nice kit that also was released with decals for a Dutch Coast Guard aircraft.

This walk around page was first published October 2017 by M. de Vreeze