The Northrop N-9M was an made to test the flying wing configuration for a large flying B-35 wing bomber. Made at approximately one-third scale, it was first flown in end December 1942 to provide flight test information from which the maneuverability, controllability and performance. The N-9M was partially constructed of wood with the wings' outer surfaces skinned with a strong, specially laminated plywood. Many flights were made but the Menasco engines gave troubles. The Northrop XB-35 flying wing was eventually developed and proved to be rather unstable and the project was not further proceeded. The remaining N-9M flight test aircraft, except for the final N-9MB, were scrapped. It was flown from Muroc and later stored at Chino. 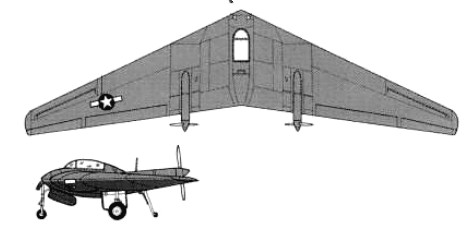 This aircraft made in 1944. It was obtained from the USAF in the 1950s by the Planes of Fame museum at Chino. Restoration started not earlier than 1981 and was completed 13 years later. It was painted in its original yellow-over-blue scheme. Seen at Chino.

A few plastic scale models of the N-9. Older vacuforms were released but now Sword has a 1/72 and 1/48 kit.