The Ryan FR Fireball was fighter designed from 1943 during the Second World War. It had a unique engine concept: a combination of piston and jet that was new at the time. It had a tricycle gear and large propeller and the jet in the rear. First flight of the XFR-1 was June 1944. It was claimed it had a laminar flow airfoil and it was armed with 4 machine guns. It first lacked stability and had insufficient strength. It was in fact the first US NAVY jet aircraft but only about 70 aircraft were built and used by in fact a single USN squadron (VF-66 / VF-41 / VF-1E) as the war ended. The Fireball was with drawn mid 1947. 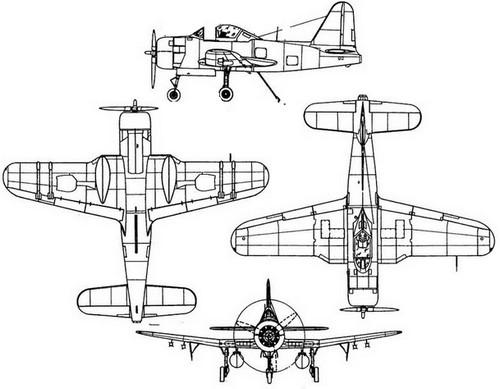 This aircraft is the only remaining Fireball. Bur.no "39657"  was used by NACA Ames beginning 1945 until mid 1947. Then it was an  instructional airframe at a technical school. Later was restored to static display condition at Air Museum Planes of Fame Museum in Chino where it was seen.

Several models were released despite that not many real aircraft were produced: in 1/48 scale by Hawk in 1945??? and later by Czech Model. Old vacuforms were in 1/72 from Airmodel, Eagles Talon/ Wings and Execuform. A poor short run kit was from Pegasus but later a good  injection moulded 1/72 kit was released by MPM.

This walk around page was first published February 2018 by M. de Vreeze  ;   note the Copyright!