The Lockheed company developed the C-140  for a USAF requirement but after not getting the contract decided to pursue business market sales. The JetStar with company designations L-329 and L-1329 was a reasonable success and was produced from the early 1960s to the 1970s. It had no less than four engines mounted on the rear of the fuselage and fuel tanks fixed to the wings. Typically it had crew of 2 and a 10 passenger layout cabin with a cruise speed of about 811 km/hr. Eventually it was also ordered by the USAF with designation C-140 with some 50 aircraft deployed in several roles.

Some 200 Jetstar aircraft were manufactured until 1978. Elvis Presley owned 2 jets and many were used in executive transport roles and a few by airlines. Even some foreign air forces used the Jetstar in VIP roles. 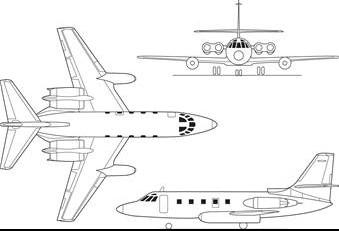 This is a modified C-140 JetStar ("N814NA") that was flown by NASA's Dryden Flight Research Center from 1964 to 1989. It was manufactured as the 814 and arrived at Dryden in 1963. It even had once a  modern propeller for testing acoustics. It does not carry the wing mounted slipper fuel tanks and has various test modifications.

There are a few kits of the C-140:  in 1/144 kits by Airmodel , Anigrand resin but now a better Roden injection kit. In 1/72 there appears to have been an old Combat Models vacuform.