The Boeing company developed based on their 707 airliner for the USAF an air refuelling tanker, the KC-135. First flight was in 1956 and although it looks similar to the 707, it is a quite different aircraft with four J-57 engines and a refuelling boom system at the rear. The Stratotanker was used in many conflicts all over the Globe. Many versions were developed for various tasks including C-135 transports but also special tasks like reconnaissance, ECM etc. Over 700 tanker aircraft were manufactured and it replaced te KC-97 and over 100 other C-135 aircraft for various roles.

Many years later many aircraft were re-engined with TF-33 bypass engines. It can also be fitted with underwing pods to refuel more aircraft at the same time. It still continues to fly after more than 50 years along with the B-52 Stratofortress bombers. 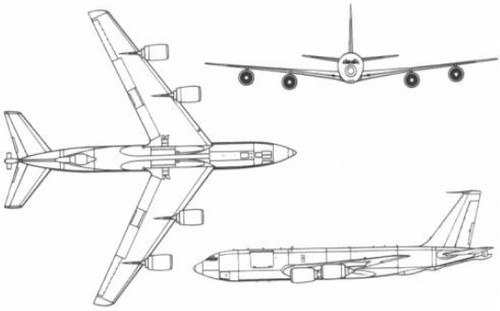 A few kits of the KC-135 exist. First there were old kits fom Aurora and Revell in odd scales. Than Revell came with a 1/144 kit with now a good Minicraft kit in the same scale. Welsh also has 1/144 kits. In 1/72 scale there is the large AMT-ERTL that also appeared in Italeri, Airfix and Heller boxes in various forms.

This walk around was first created March 2018 by M. de Vreeze ;   note the Copyright!