The Bristol F.2 Fighter was designed to a RFC specification in 1915-1916 and first flew in September 1916. It was a two-seat biplane fighter and reconnaissance aircraft. First it had a Rolls Royce Falcon engine but later got the standard  Hispano-Suiza engine. The fuselage was set mid-way the two wings. A Vickers gun was set in the forward position with a Scarff mounted machine gun at the rear. The type 14 was known as the F.2B. During the First World War is performed well in the recon role though it was vulnerable.

After the war many were converted for civilian use, often fitted with a Puma engine. 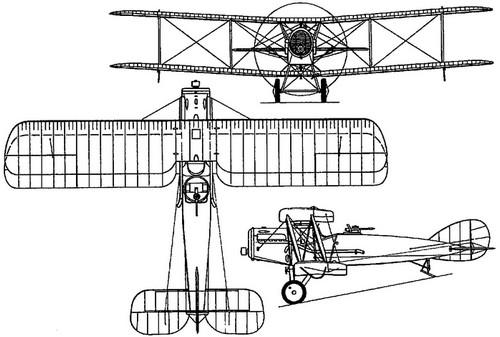 This Bristol is a Type 17 coded "66" with a 300 hp Hispano Suiza engine. It is original and has Belgian markings as used in the 1920s. This aircraft was seen at the Jubelpark armed forces museum in Brussel, Belgium.

Several models were released:  in 1/72 old kits by Airfix, Pegasus and better models by Classic Plane and now an excellent Roden kit. In 1/48 by Roden and a very good Eduard kit. Spectacular is the Wingnut Wings kit in 1/32 scale.