The Yakovlev Yak-3 (Russian: Я́ковлев Як-3) was a famous Soviet fighter aircraft of the Second World War. Design started in 1941 based on the I-30 it was delayed due to the war crisis. Some redesign took place and the first Yak-3 were lightly armed with rapid production and service entry starting in the summer of 1944 with the USSR "air armies". Some operational problems were caused by the plywood materials but nevertheless it was robust, easy to maintain, and a highly successful dog-fighter. It was used mostly as a tactical fighter, flying low over battlefields and engaging in dogfights. 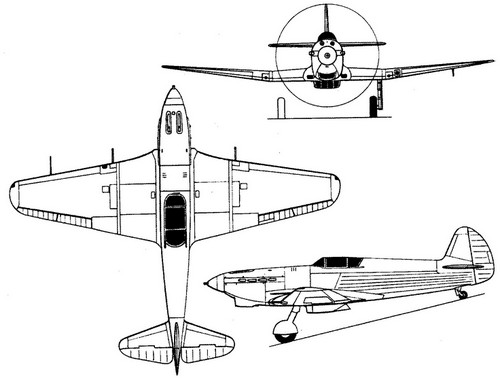 This Yak-3 coded 2530 arrived to Paris Le Bourget in 1945 and it is original. Some forty Yak-3 fighters were flown to France to fight as ordered by Stalin and were flown by the Normandie-Niemen group. It was seen with 2 schemes port and starboard on display at the Paris Le Bourget museum.

This particular aircraft started life as a two seat Yak-11 trainer but was converted in Russia into a single-seat Yak-3. It was obtained by The Planes of Fame Air Museum, can fly and is registered NX130AM and is painted as a Yak-3 flown by Marcel Albert of the Normandie-Niemen group in France.

It is on display at the Planes of Fame museum, Chino, Ca.

Several models were released of the YAK-3:  In 1/72 scale dozens of kits have been released such as the old Heller, Hasegawa, Red Star kits and later on kits from Zvezda, Hobbboss. In 1/48 Eduard has a nice kit. In 1/32 scale Special Hobby has a nice kit.