The Boeing B-50 Superfortress was an improved aircraft based on the famous American B-29 Super Fortress bomber from the Second World War. It got considerable changes such as more powerful Pratt & Whitney R-4360 radial piston engines in changed nacelles, a stronger structure, and a taller tail fin. The development took some time as the war meanwhile had ended but a new Cold War energed. The first production B-50A flew June 1947 and the bombers were to fly for the Strategic Air Command and capable to drop nuclear bombs.

Secret reconnaissance missions were flown by the RB-50 with 3 versions: the photo RB-50E, the RB-50F for mapping, charting, and geodetic surveys, and RB-50G for electronic reconnaissance. Later on from 1955 several B-50's were converted also for supporting the new bombers like the B-47 and B-52 as aerial tankers for Tactical Air Command as the KB-50. Some GE J47 jet auxiliary engines could be fitted for increased speed.

The WB-50 was a version used as weather reconnaissance aircraft for the Air Weather Service and used until the mid 1960s.

Some 370 B-50 aircraft were manufactured. 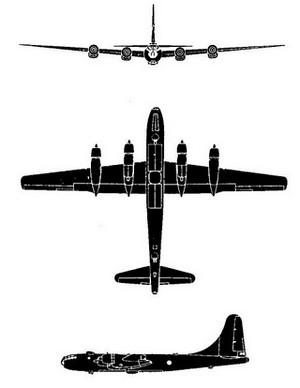 This walk around page was first created April 2018 by M. de Vreeze ;   note the Copyright!