The Laird-Turner RT-14 Meteor was the winning aircraft of the 1938 and 1939 Thompson Trophy races. Built by the Lawrence Brown Aircraft Company as designed by Roscoe Turner and Professor Howard Barlow it flew first 1936. It was also called the Turner TR-14, Ring Free Meteor, PESCO Special, Miss Champion, Turner Special. The Meteor was the last of the Matty Laird race planes as well as the last race plane flown by Roscoe Turner. 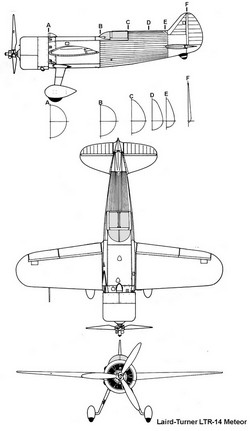 This Meteor registred NX263Y is a flying REPLICA.  (The original went to the Smithsonian National Air and Space Museum in 1972).

This flying replica aircraft was seen on display at the Tony Wathen Collection at Flabop airport, Rubidoux, California.

Several plastic scale models were released. In 1/32 scale an old Pyro and Lindberg kit. In 1/72 Dekno has a kit.

This walk around page was first published May 2018 by M. de Vreeze.;   note the Copyright!