The Alpha was designed as a fast mail/passenger transport aircraft used in the 1930s. Design work was done at the Avion Corporation with a single-engined, all-metal, seven-seat, low-wing monoplane design. In 1929 the company became the Northrop Aircraft Corporation based in Burbank, California. First flight was in 1930 and some 17 aircraft were built flying mainly with TWA but also a few with the US military. 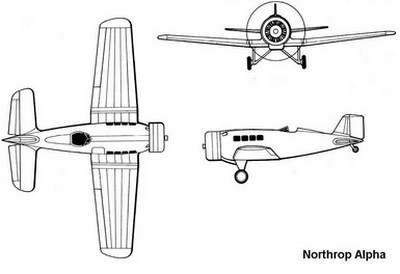 This is the third Alpha built. Registred NC11Y. It was re-acquired by TWA in 1975 and is preserved at the Smithsonian National Air and Space Museum. It hangs from the ceiling but is presented as it is a unique aircraft.

This walk around page was first published May 2018 by M. de Vreeze ;   note the Copyright!