The NACA/ NASA performed research on the aerodynamics of so called "lifting bodies". Lifting bodies were a major area of research in the 1960s and 70s as a means to build a small and lightweight manned spacecraft "without wings". It appeared the mission requirement for space flight required wings as seen on the much later developed Space Shuttle. 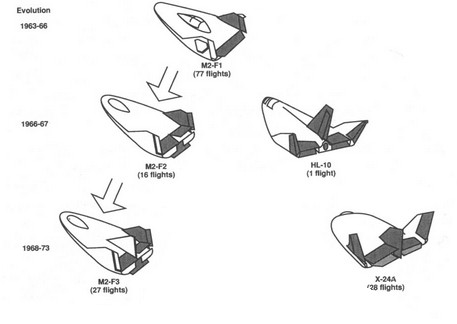 The M2-F1 was a lightweight, unpowered prototype aircraft, developed to flight-test the wingless lifting body concept. It was designed by the NASA Dryden with a team from Briegleb Glider company in 1962. Designated M2-F1: the "M" referring to "manned", and "F" referring to "flight" version. It had the nickname "flying bathtub" and was completed in 1963. It was seen on display at Edwards AFB.

The Northrop M2-F3 was a heavyweight lifting body rebuilt from the Northrop M2-F2 (after it crashed at the Dryden Flight Research Center in 1967). It was modified with an additional third vertical fin - centered between the tip fins - to improve control characteristics. Completed in 1970 and used for research. It was retired in 1973. It is preserved at the Smithsonian National Air and Space Museum,Washington.

This walk around page was first published May 2018 by M. de Vreeze.;   note the Copyright!