The Short S.25 Sunderland was developed as a long range British flying boat patrol bomber for the Royal Air Force in the 1930s. It first flew on 16 October 1937 and was a large four engined aircraft with a usual crew of 9 - 11. A heavy armament of guns was installed and it could drop bombs and depth charges. It was an important type during the Second World War  fighting enemy shipping and Uboats particularly at the Atlantic and was named the "Stachelschwein" by the German ("flying porcupine"). Some 750 Sunderlands were manufactured. A few aircraft were also flown by the French Navy. After the war several aircraft were converted for civilian passenger use and called the Solent. 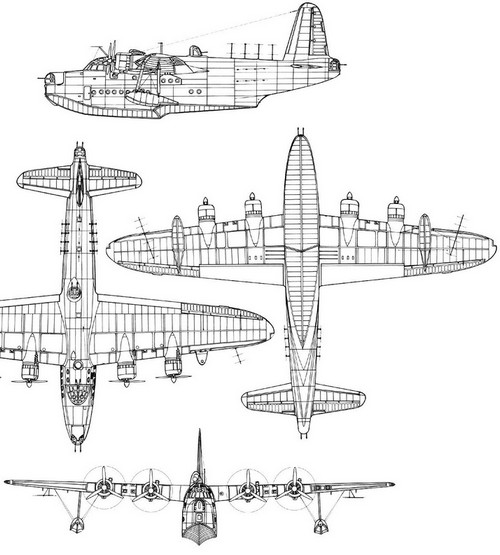 This aircraft was manufactured as RAF Sunderland IV numbered NJ203 (also called Seaford S.45). It was converted into a civilian Solent 3 after the Second World War for transporting passengers in 1946 at the factory in Belfast. It was used from 1949 by the BOAC named "City of Cardiff" and registered G-AKNP. It flew various routes. Being sold and operated by various civilian operators it had names like "Star of Papua" and "The Isle of Tahiti". In 1953 when she was bought by South Pacific Airlines and later Howard Hughes. Seen in a BOAC scheme named "City of Cardiff"  at the Oakland aviation museum, Ca., USA.

Some plastic scale model kits exist of the Sunderland. Some old kits had odd scales. In 1/144 F-RSIN has a resin kit. In 1/72 the old Airfix kit from 1959 is well known and was released several times in a new box. A more detailed 1/72 kit is released by Italeri in several versions. Combat Models had a 1/48 vacuform. ID Models had even a very rudimentary vacuform model in 1/32 scale!

This walk around page was first published on September 2018 by M. de Vreeze ;   note the Copyright!