The British aircraft company Hawker designed a light biplane bomber to an RAF requirement of 1926. The Hart first flew in June 1928 and was designed by the famous Sydney Camm. It later got the Rolls Royce Kestrel I engine of 525 hp and was faster than many fighters in the 1930s. RAF service entry was in February 1930 and some were deployed ton the Middle East and India before the outbreak of WW II. Nearly 1,000 aircraft were manufactured and the type had some modifications and different names as it was also used by various air forces in the British Empire (as Audax) and in neutral Sweden. The Hawker Demon was a fighter variant of which some 300 aircraft were manufactured. Other variants were the Hardy and Osprey, a navalised version of which some 100 were built. 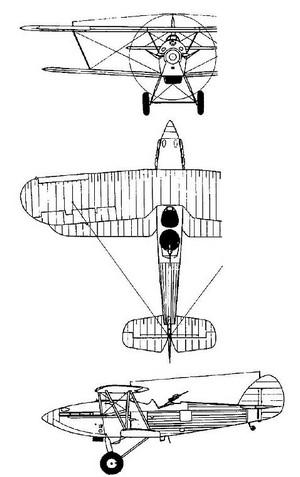 This aircraft has serial J9941. Manufactured beginning 1931 it was used over the following years in the 1930s for tests by Hawker and got in 1939 the civilian registration G-ABMR. During the war it was used for ferrying pilots by Hawker. After the war it was flown by the Royal Aeronautical Society and in May 1949 was fitted with a Kestrel XVI engine. In 1959 it was repainted in military RAF markings (though it had non-standard not slotted ailerons). In 1963 repainted as an RAF no. 57 squadron Hart. It was transferred in 1972 to the RAF museum in Hendon (London).

The Kestrel engine is also shown.

Some plastic scale model kits exist of the Hart. In 1/32 there was a rudimentary vacuform by ID Models with now a splendid 1/32 Silver Wings kit. In 1/48 a kit is not known. In 1/72 scale the good old Airfix had a kit from 1957 with later on a basic Merlin kit, an Aeroclub as well with now a good AZ Model kit. Kora Models also has the Hart in  several 1/72 releases with special markings.

This walk around page was first published on October 2018 by M. de Vreeze;   note the Copyright!