The Oxford was developed in the 1930s by Airspeed as a twin engined trainer aircraft to an RAF specification. First flight was in June 1937 and it usually had Cheetah engines. Over 8,700 Oxford aircraft were manufactured by various companies under license and it was an important trainer aircraft during the Second World War to train RAF Bomber Command crews.  After the war some aircraft were used by civilian operators as the Consul with 6 seats. It was flown by various air forces including the Netherlands. 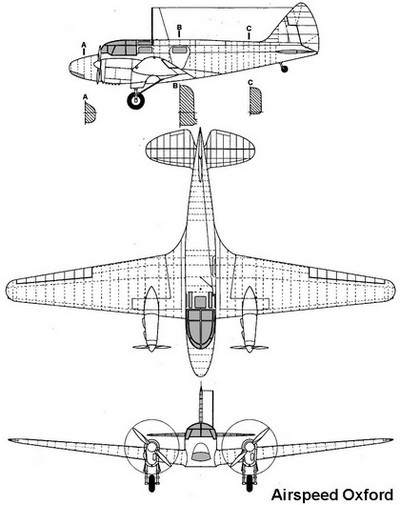 This aircraft has serial MP425. From 1943 it was used by various training units in the RAF during WW II. After the War, in November 1946 it went to Air Service Training ltd as G-AITB. May 1961 it was put out of service at Perth and later in 1969 went to the RAF Museum were it was finally restored around 1991. Seen at the RAF museum in Hendon (London).

Some plastic scale model kits exist of the Oxford. In 1/72 scale the old 1963 kit of FROG (also in Tri-ang/ Novo boxes) was followed by a Pavla kit with now far better kits from AZ Model / Admiral. In 1/48 scale Special Hobby released a kit from 2011 with previously only basic Contrail vacuform being available. No 1/32 scale kits are known.

More info about Oxfords operated by the Netherlands air force and naval flying service can be seen here.....

This walk around page was first published on October 2018 by M. de Vreeze;   note the Copyright!