The Tempest was designed during the Second World War by Sydney Camm at Hawker aircraft based on the Typhoon as a better high altitude fighter. It got a thinner wing and at lower altitudes it was very fast. First flight was September 1942 and it was a good fighter during the war. Over 1,700 aircraft were built in several variants often fitted with a Centaurus V or VI engine. It was also used after the war by New Zealand, Pakistan and India. The Tempest design was also used in the development of the naval Sea Fury. 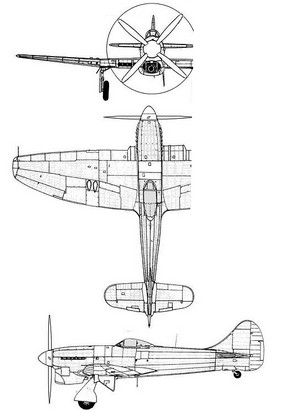 This aircraft is mostly a Tempest of which the fuselage had the serial PR536 (later HA457). It was one of the aircraft flying with RAF no. 5 squadron in Peshawar (Pakistan) and handed over in September 1947 to India. Several Tempest aircraft parts were found in the 1960s also at Poona and several parts were retrieved and sent to the U.K from which this Tempest was reconstructed at Duxford.  From 1991 it is on display at the RAF museum in Hendon (London) with the RAF no.5 squadron based at Poona markings.

Many plastic scale model kits exist of the Tempest. In 1/72 there was first an old FROG kit (also in Novo, Tri-ang bags) and in 1974 Matchbox came with a kit. Followed in 1978 by Heller (also released by Airfix, Smer, Hasegawa, Intech, Mistercraft) and Academy also came with a kit. CMR had a resin 1/72 kit as well.

In the small 1/144 scale Gunze Sangyo (later Revell) and Crown (also appearing under Academy, AHM and Minicraft) had kits as well as many years later Trumpeter.

For the large 1/32 scale Special Hobby has a nice kit.

This walk around page was first published on October 2018 by M. de Vreeze; note the Copyright!